Jimmie Johnson had so much fun racing at Watkins Glen International last year, he “LOL’d” while driving.

It wasn’t like his previous races at Watkins Glen. Instead of the NASCAR Cup Series car he piloted in his previous 19 races at the famous road course, last year Johnson was behind the wheel of a Cadillac DPi-VR in the IMSA WeatherTech SportsCar Championship.

“The years I spent driving cars, my senses and body understood a certain level of grip and speed and reference points for braking marks and on-throttle marks,” Johnson said. “When you just shatter everything you know, it just makes you laugh. Inside the car, I’m literally laughing. I’m like, ‘I cannot believe I just did that in a race car.’ That’s the part of the sport I’m really enjoying.”

Johnson returns this week for the Sahlen’s Six Hours of The Glen in the DPi car, the No. 48 Ally Cadillac prepared by Action Express Racing. His first attempt in the car at WGI last year ended in fifth place.

“That was truly the eye-opening experience I had last year,” Johnson said. “I had six laps of practice before the race, and I was nowhere near pace. Then my stint toward the end of it, I think I had 20, 25 laps in the car, I was finally close on pace and ran my fastest lap on my in lap. I took 30 laps to finally find the aggression level.”

Adding to the adjustment is the use of four corners (Turns 6 through 9) for the IMSA races that NASCAR does not. The extra “Boot” section is a demanding, high-speed downhill/uphill run, and getting it right became part of the reason for Johnson’s joy. 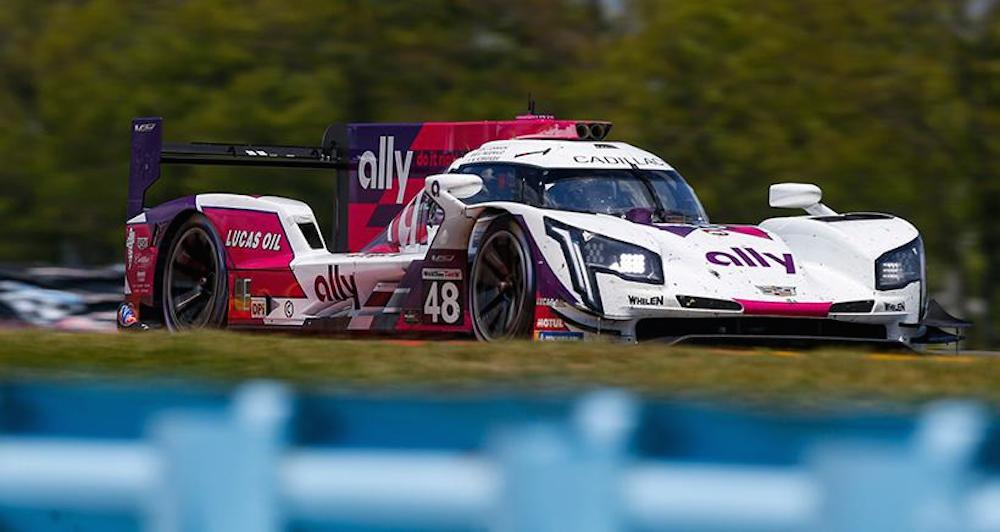 “In one of these DPi Cadillacs, the pace and effort you have to drive around that racetrack is quite impressive, especially comparing it to my days in NASCAR,” Johnson said. “Some of the braking zones, the Bus Stop and the Carousel, it’s just mind-blowing how fast these cars can travel through those tight little areas. (I’m) very excited to get back and have that experience once again.”

The seven-time Cup champion has expanded his experiences to the IndyCar Series and the IMSA Michelin Endurance Cup races of the WeatherTech Championship since leaving NASCAR. Johnson will team with Kamui Kobayashi and Mike Rockenfeller in the No. 48 Ally Cadillac for the Sahlen’s Six Hours, which begins Sunday at 10:40 am ET.

Johnson, Kobayashi, Rockenfeller and Jose Maria Lopez opened the WeatherTech Championship season with a fifth-place finish in DPi at the Rolex 24 At Daytona. Johnson had to miss the Mobil 1 Twelve Hours of Sebring Presented by Advance Auto Parts in March due to a conflict with the IndyCar schedule.

“Really excited to see Kamui and Mike — two great human beings and great guys to be around,” Johnson said. “All in all, I have a lot of excitement to come back to Watkins Glen. It’s a track and area that I really do enjoy. And to be on the track through the full loop – the Boot – I have not done that many times in all the trips that I’ve been there, so I’m excited to run the full-distance track.”

Johnson said he planned to spend time in the racing simulator on Wednesday to get re-accustomed to Watkins Glen, but nothing is like time in the actual race car. The more seat time in the DPi, Johnson says, the faster he gets.

“You can see that gap closing and I felt much more comfortable and competitive in the car,” Johnson said. “In a short race, a six-hour race, the importance of being at pace is even higher yet. I’m excited to get a few laps in practice, and I’m not sure I’ll get much more than that the way the practice sessions work out. Hopefully, the time I spend in the (simulator) actually will pay off, and I can get a step closer to the pace I want to run.”

One thing we know: He’ll be laughing, just as he did last year.

The WeatherTech Championship schedule for The Glen features two practice sessions – late Friday afternoon and early Saturday morning — ahead of qualifying on Saturday afternoon (livestream at 1:15 pm ET on IMSA.com/TVLive).

Sunday’s race, the third of four legs of the Michelin Endurance Cup, streams live flag-to-flag on Peacock starting at 10:40 a.m., with USA Network picking up television coverage at 2 pm through the conclusion.