“Sh**ting Stars” zooms back in this week, peeling back the layers around our cool-headed head of PR and the megastar who refuses to leave her orbit. Gong Tae Sung (Kim Young Dae) and Oh Han Byul (Lee Sung Kyung) continue to bicker their way through each day while being perfectly professional in every other area of ​​their lives. They are also perfectly oblivious as to how bad they have it for each other. Romance, rumors, and the reality of celebrity dating are the focus this week, and no one in Starforce Entertainment is safe from all three chaotic forces.

Here are our favorite moments from this week’s episodes where love lives get turned upside down!

Warning: spoilers for episodes 5-6 below.

Poor Gi Bbeum (Sojin) continues to not catch a break this week. Having recovered from appendicitis, her boss gleefully pounces upon her post-return to work and demands a scoop at all costs. An irritated Gi Bbeum skulks in a park where celeb couples often date in secret and runs into her ex, a fellow reporter named Cha Min Ho (cameo by Oh Eui Sik). They both know why the other is there, and as they stake out the area together, Gi Bbeum’s heart can’t help fluttering at Min Ho’s small gestures of kindness. But then he deletes her scoop article and nearly destroys her laptop in the process because he refuses to have a woman succeed over him. Wow.

There’s also the cute actor (cameo by Chae Jong Hyeop) who keeps sending her flirty messages every day after an interview. Gi Bbeum stands firm against the pretty face but can’t help succumbing after a week, only to find that he texts every reporter the same cutesy messages. That’s one way to ensure that you don’t get any negative press. Yikes. 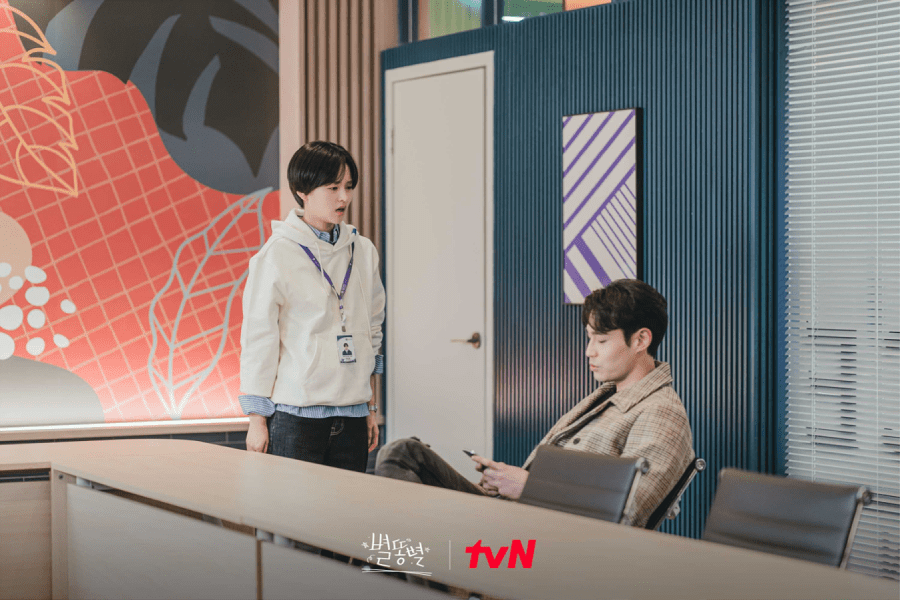 Good old hardworking Ho Young (Kim Yoon Hye) continues to diligently manage her talents. Rumor hits her like a door in the face when one of her talents is caught up in a three-timing dating scandal which turns out to be true. On the other hand, her newest recruit – a cute chef from a restaurant – Kang Si Deok (Lee Seung Hyub) promises to be a hit with audiences. Ho Young trains him to grow accustomed to a Seoul accent versus his satoori (regional dialect) but grows stuck on his stage name. After much failed brainstorming, Ho Young is suddenly put on the spot when an actor drops out of Tae Sung’s drama and a satoori-speaking replacement is needed. Casting around for a name, her eyes fall on the closest person: Starforce Entertainment’s ace Kang Yoo Sung (Yoon Jong Hoon), and that becomes Si Deok’s new name immediately. Han Byul laughingly notes that there’s been more than one case of an actor taking on a manager’s name as their stage name (like Seo Kang Joon! Who knew?). Yet, it appears that there’s another reason for Ho Young’s choice. She has a massive crush on Yoo Sung! No wonder she’s trying so hard to catch up to him. Just look at her face when he affectionately calls her cute. 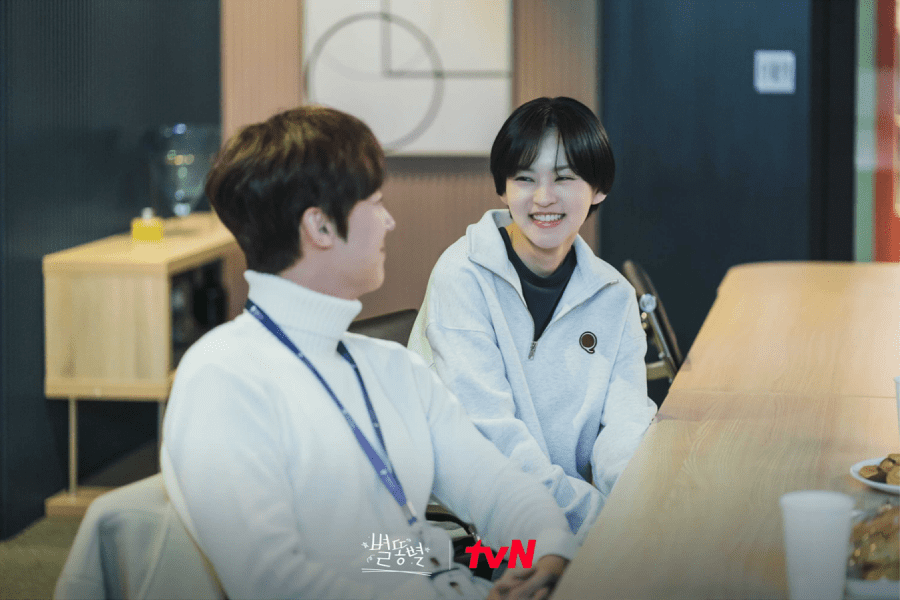 But Ho Young also has to field disaster after disaster this week because the press remains busy, and rumors are a hotter commodity than ever. 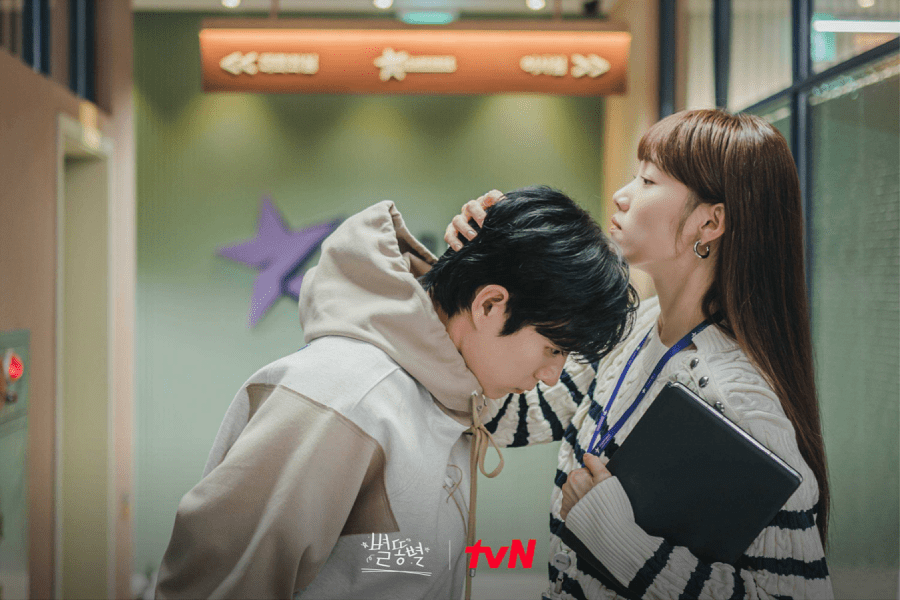 The issue with rumors is that even the whiff of one is enough for people to view the object of rumors in a different light. So when rumors pour in about Tae Sung being a club addict with stinky hair, the poor guy starts getting a few side eyes. It isn’t true, but that’s the beauty of a rumor. It doesn’t have to be; just the stnch of it is enough to have people wondering if there’s fire where the smoke is. An aggrieved Tae Sung washes his hair over 10 times a day and keeps fearing that it smells to the point where his scalp is about to fall off. He doesn’t take anyone’s reassurances seriously until Han Byul swoops in, drags his head down, and smells his head. He gapes while she pronounces it perfectly decent-smelling, and just like that, his worries vanish – especially when she successfully proves that the rumors originated from a conversation about Tae Sung’s health club that people overheard and blew out of proportion. Han Byul has a special interest in rumors, having been on the receiving end of them years ago. But hers weren’t so easily assuaged. Or so she thought.

The curtains peel back on the mystery of Han Byul and Tae Sung’s campus relationship to reveal that they were just friends, albeit ones that bickered every few seconds. Heaven knows how Han Byul got roped into the photo op with Tae Sung, but rumors immediately started that she was his girlfriend and that she’d practically forced him into dating her. Increasingly isolated, Han Byul had kept her head down. And it seemed that Tae Sung’s life went on oblivious to the damage he’d caused without him providing any sort of clarification.

Only, that isn’t true. Upon returning to her alma mater to give a speech, Han Byul is quizzed by the head of department who seems surprised that she was never dating Tae Sung. This is due to the fact that he came to her and requested that all promotional materials be scrapped during the whole poster scandal. In return, he would willingly come back year after year to be the face of the school. Taken aback, Han Byul wonders how to revise her opinion of Tae Sung when he’s such a selfish person. Gi Bbeum wisely notes that Han Byul seems to want to think of him as a selfish person and asks if she’s ever fallen for him, even for a second. Han Byul denies it looks irritated and that seems to be that. But is it?

Wow, Tae Sung is as obtuse as it gets. Turns out, despite everything he secretly does for Han Byul, he hasn’t figured out yet that he’s in love with her? He perks up when seeing her, practically wags his tail the second she speaks, but hasn’t put it together? Tae Sung, please. But his subconscious seems to have things figured out better than his mind does. When Han Byul brings over a list of questions for a magazine interview and asks him what the best moments in his life were, he sleepily mutters that she was in all of them and asks her to stay by his side. And this boy doesn’t even know that he was confessing!

He flops onto a startled Han Byul’s shoulder, and she freezes before scurrying away from the room. Tae Sung’s completely oblivious to his confession and his hidden feelings until a chance conversation has him realizing that he’s far too curious about Han Byul. And excessive curiosity, according to Byun Jung Yeol (Jin Ho Eun), is the first symptom of love. It’s like a lightbulb goes off in his head as he realizes that all those longing looks were for a reason. He’s in love with this girl, and if he doesn’t act fast, he’s going to lose her because he isn’t the only one who’s noticed what a catch Han Byul is. Do Soo Hyuk (Lee Jung Shin) is determined to win her over despite Han Byul’s evident professional distance. And now that the two are neighbors, this love squabble is about to get incredibly petty. But if there’s one person who’s behaving like an adult here, it’s the object of their affections. Han Byul remains the best. Honest to a fault, she’s quick to praise and just as fast to admit when she’s wrong – as demonstrated by her thanking Tae Sung for what he did about the college photo shoot all those years ago.

It’s the first time we see her smile so freely around him. As Tae Sung revisits the greatest moments of his career: his graduation, his film 10 million moviegoers, and his first Best Actor award hitting, we see a supportive, cheerful Han Byul by his side. She’s laughing with him, excited for him, and even crying when he isn’t. Throughout the episodes, the question arises as to where that Han Byul went. And we don’t have to wait long for an answer.

6. The truth behind Han Byul’s facade

It’s almost hilarious how everyone knows it but her. And yet, Han Byul isn’t being purposefully obtuse here. Nor does she hate Tae Sung as much as she’s tried to over the years. This is the woman who celebrated his every high with him and who was happier for him than for herself.

The layers peel back on Han Byul, and we see every moment in a new light at the end of the epilogue. She couldn’t help but swoon internally when he rested his head on her shoulder.

The same goes for when he insisted on sneaking a sip of her coffee, when he gave that spiel about his ideal type being someone comfortable, or when he seemed to be smiling at her, for her. Oh Han Byul, at the start of her career (and Tae Sung’s), was irrevocably in love with him. Then Tae Sung dated someone else.

And just like that, the fantasy broke into pieces around her. It’s heartbreaking to see her cry because it’s so easy to interpret what Tae Sung does as flirting. Until we get more context, he was either genuinely feeling something and then something got in the way, or he’s one of those people who’s affectionate with everyone and all he felt toward Han Byul at the time was trust. Either way, it’s a devastating come down. She tells Gi Bbeum that no one can have feelings for a celebrity in this industry and survive. But what she isn’t saying is that she did. And in order to survive, she cut off that idealistic part of her that genuinely believed Tae Sung felt something. She did it so that she could survive, thus birthing the unconcerned Han Byul we know today, the one who doesn’t care who Tae Sung dates and deals with him at an arm’s length. Ouch.

Next week, with Tae Sung having finally realized his feelings, it’s an all-out war between him and Soo Hyuk. Meanwhile, Yoo Sung continues to meet with Eun Si Woo (Choi Ji Woo), and we still don’t know why Tae Sung decided to sign with Starforce at all. They say there’s a fine line between hate and love, and Han Byul appears to have crossed over from one side to the other to protect herself. Having been burned once, will she really cross over once more? Tae Sung’s going to have his work cut out for him!

Check out the drama below!

What did you think of this week’s episodes? Let us know your thoughts in the comments below!

Shalini_A is a long time Asian-drama addict. When not watching dramas, she works as a lawyer, fangirls over Ji Sung, and attempts to finish up the greatest fantasy romance of all time. Follow her on Twitter and Instagramand feel free to ask her anything!