Internet service providers offer online access with a variety of technologies, speeds, and prices. That means plenty of choices for consumers.

Here is a list of large ISPs in the US for 2022. These providers offer internet service through DSL, copper, fixed wireless, cable, and fiber. Prices and availability vary by location and are subject to change.

Xfinity is Comcast’s brand for consumer cable TV, internet, and phone services. Comcast is one of the largest cable providers, offering services to residential and commercial customers in 39 US states. Xfinity provides download speeds ranging from 50 to 3,000 Mbps. Xfinity has a monthly data cap of 1.2 TB, more than enough data unless you’re a very active user. Plans range from $20 to $300 per month.

Google Fiberpart of the Access division of Alphabet, is fiber internet and TV. It offers straightforward pricing across two plans, plus mesh Wi-Fi networking to ensure high-speed access throughout the home. Google Fiber provides 1 Gbps speed at $70 per month and 2 Gbps at $100 per month with no data caps or annual contracts.

WOW (“WideOpenWest”) provides cable, fiber, and DSL internet access across 10 states in the Central and Southeast regions. WOW offers plans with no data caps and no contracts, from $39.99 per month for 100 Mbps to $74.99 for 1 Gbps. 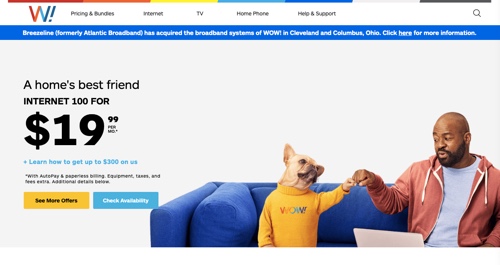 Spectrum, the consumer brand of Charter Communications, became one of the US’s largest internet providers via the acquisition in 2016 of Time Warner Cable and Bright House Networks. Spectrum provides cable internet, bundled with TV and phone, and download speeds from 100 Mbps to 1 Gbps. Plans start at $49.99 per month for 200 Mbps with no data caps. Spectrum’s internet service is available in 44 states.

Consolidated Communications Offers DSL and fiber internet services to consumers and businesses across 23 states, with plans to extend fiber to 70% of its footprint by 2025. Prices start at $25 per month with no contracts and no data caps.

CenturyLink, the consumer brand of Lumen Technologies, provides internet service to 37 states, with 25 of those via fiber. The company’s DSL internet has speeds up to 140 Mbps; speeds for two fiber plans range from 200 and 940 Mbps. Plans are $50 per month except for the top fiber speed at $65 per month.

T-Mobile started offering home internet via 5G or 4G LTE in 2021. It’s now available to more than 30 million households in 40 states. Pricing is a flat rate of $50 per month with no contracts and no data caps. 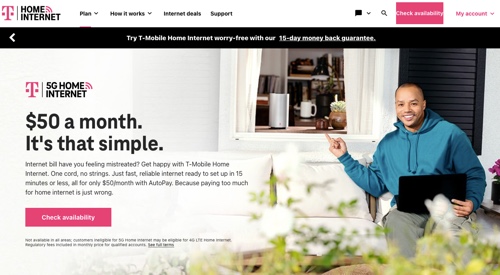 Mediacom was founded in 1995 to bring advanced TV, internet, and phone services to America’s smaller cities and towns. It’s the fifth-largest cable provider and offers services in 22 states, with its best coverage in the Midwest. It recently completed a three-year $1 billion reinvestment project to expand its fiber network. Plans start at $19.99 per month for 100 Mbps. The 1 Gbps plan is $59.99 per month with a 6,000 GB data cap.

Starry Internet offers fixed wireless internet service that uses millimeter-wave bands to send large amounts of data over short distances. Plans start at $30 per month for 50 Mbps and $80 per month for a 1 Gbps plan — with no contracts or data caps.

Frontier Internet offers DSL and fiber internet plans in 25 states, primarily along the West Coast, Midwest, and South. Fiber is available in 19 of those states. Plans start at $34.99 per month with three fiber plans with speeds up to 940 Mbps for $79.99. Frontier Internet has no data caps.

Optimum, from Altice, offers cable and fiber internet services to four states: Connecticut, New Jersey, New York, and Pennsylvania. Optimum does not have contracts or data caps and offers life-long pricing. Plans start at $39.99 per month for 300 Mbps. The 1 GB plan is $79.99 per month.

Ziply Fiber launched in 2020 after accquiring DSL and fiber networks in the Northwest from Frontier Communications. The company has no contracts or data caps and offers 2 and 5 GB speeds. The monthly cost is $20 for 50 Mbps, $120 for 2 Gbps, and $300 for 5 Gbps. 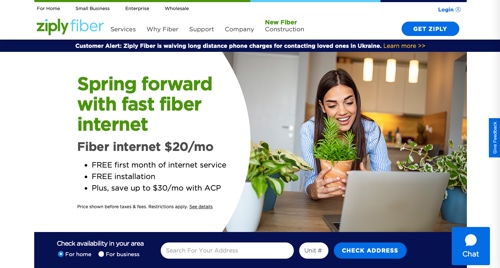 Windstream Offers DSL, copper, fixed wireless, fiber, and cable internet services. Its DSL service is available in 50 states and Kinetic fiber internet in 18. Windstream does not require contracts or data caps, but prices increase after the first year. Plans start at $19.99 for 25 Mbps and $85 per month for 1,000 Mbps.

Cox Communications is the third-largest cable television provider in the US, serving 18 states, with the most coverage in Arizona and California. Cox offers cable TV, internet, phone, and fiber services. Plans range from $29.99 per month for 25 Mbps to $99.99 for 1 Gbps.

TDS Telecom is the eighth largest DSL provider in the US, providing internet services in 31 states, primarily the Midwest. TDS offers cable, fiber, and copper internet services from 100 to 2 Gbps. Plans start at $24.95 per month with a 250 GB data cap.

Viasat is a provider of satellite internet that may be the best choice for rural areas where fiber, cable, or DSL options aren’t available. Viasat offers download speeds up to 100 Mbps. All plans offer unlimited data, but the speed may slow after using 40-150 GB. Plans start at $49.99 per month and go up to $149.99.

Starlink is the new satellite internet developed by Elon Musk’s SpaceX. Its low-orbit satellites mean a faster connection with less latency than other satellite internet networks. Starlink offers unlimited data and rural availability, though it has high upfront costs for equipment. Plans start at $99 per month for up to 200 Mbps. 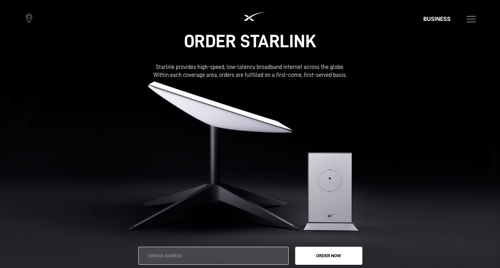